Some days (mostly Mondays) a girl needs a little alone time. Just me. Coffee. And an egg sandwich…with Kraft American Cheese. Who’s with me? 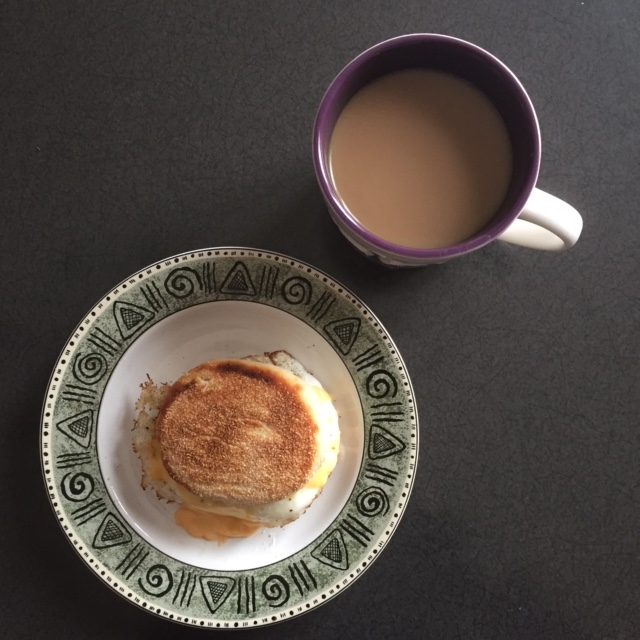 I grew up in the suburbs just outside of Detroit – in Warren, Michigan. (That was four miles from 8 mile, yo!) My sisters & I always joke that we totally grew up white trash. Evidence? In our fridge at all times growing up: a package of Oscar Mayer Bologna & Kraft American cheese slices. Fried bologna anyone?

And I’ll tell you what, most of my adult life I kept the nostalgia going in my own fridge – although I’ve let it slide as of late. Jason & I have been trying to eat less bread & only consume real cheese 🙂 But this little lady came a calling: 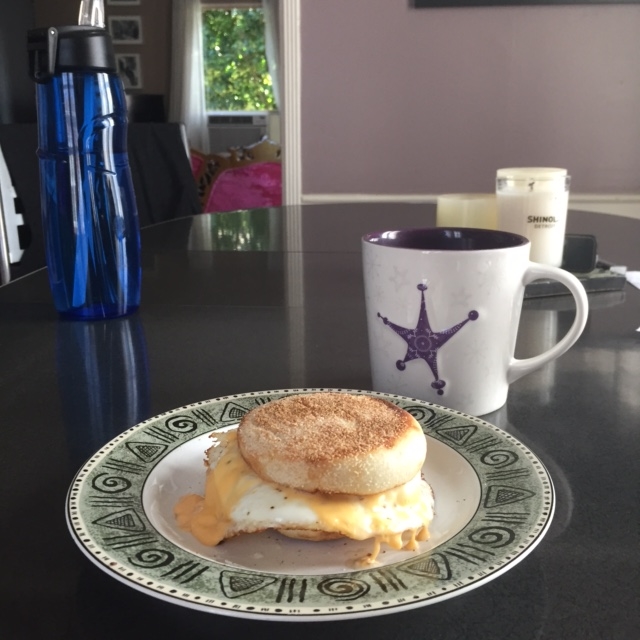 Let me tell you, she didn’t disappoint. I made two eggs – sunny side up. Melted a piece of Kraft on top and plopped it onto my favorite English muffin – Bays (only found in the refrigerated section near the eggs). And voila! Perfection.

Like a little kick in your step? Try this Light Crock-Pot Chili With Jalapeño! 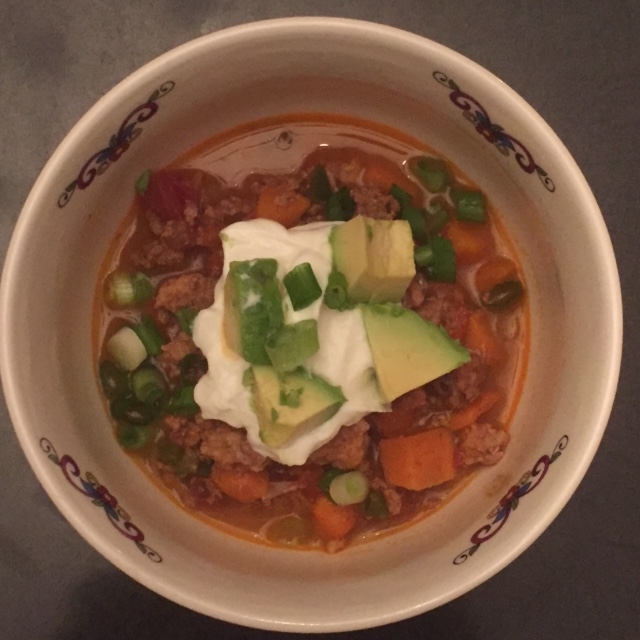 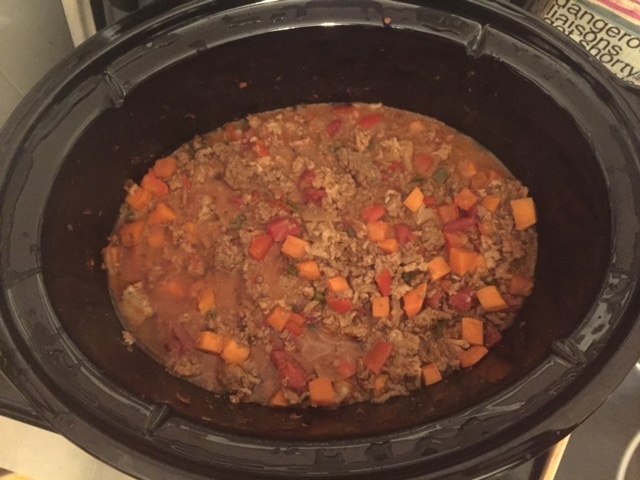 What I love about this recipe is you don’t have to brown the ground chicken & ground beef before you throw it into the crock-pot – and doesn’t that make sense? That’s the whole point of a crock-pot – the idea that you just throw a bunch of stuff in it and come back 6-8 hours later to enjoy it.

The toppings really make the chili & we had this with just sour cream (which was great) but if you like goat cheese, a little on top is divine. I got the recipe from Skinny Taste (love that site) & you can download it here–> light-slow-cooker-chili-with-jalapeno

I know it’s not really “winter” here in LA, but why is it I am so in winter mode and want all of this comfort food? Oh right, because it’s in the 50s and rainy and our early 1900’s apartment walls are made out of paper. So, turn up the red peppa – it’s cold in here! 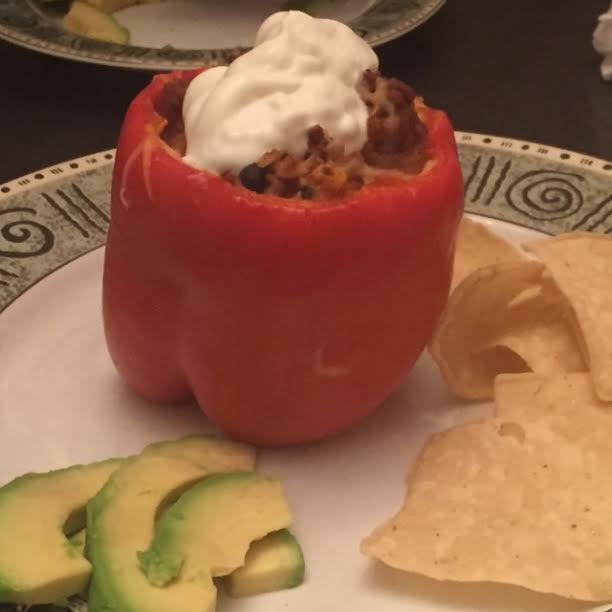 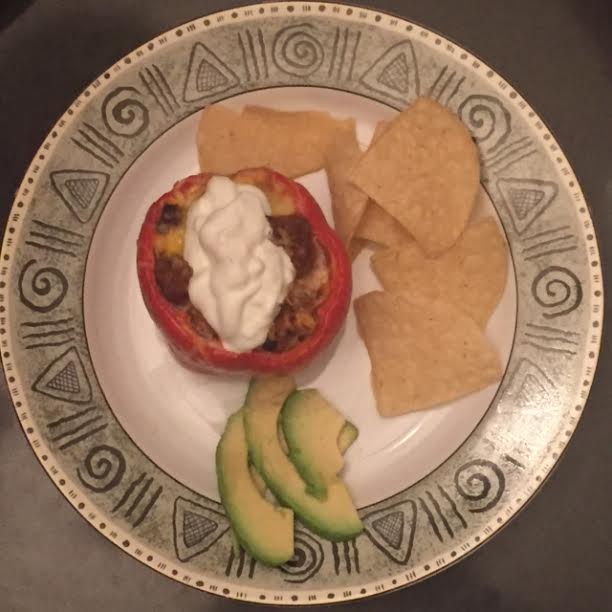 I saw an infamous Tasty video for Taco-Stuffed Peppers on facebook & had to give it a shot. Here’s the recipe. There’s only two of us, so I bought just 6 peppers & had some leftover meat mixture which was OK by me.

Plus, with this dish – you can get creative with the leftovers. For lunch the next day, we made nachos. Why on earth is broiled melted cheese on taco chips so divine?! 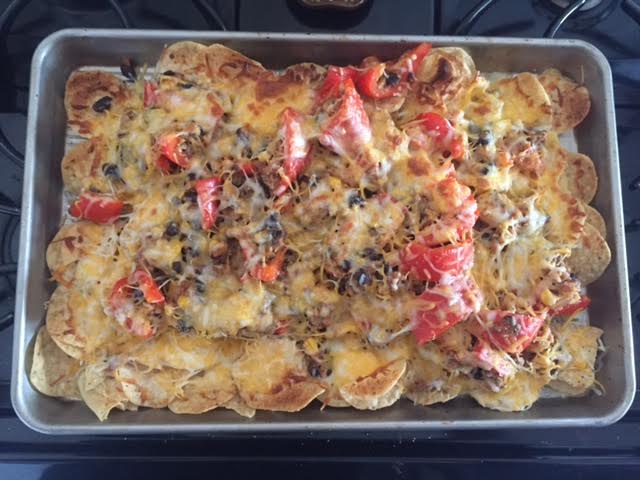 And for dinner another night we made tacos with gas stove-top crisp tortillas. 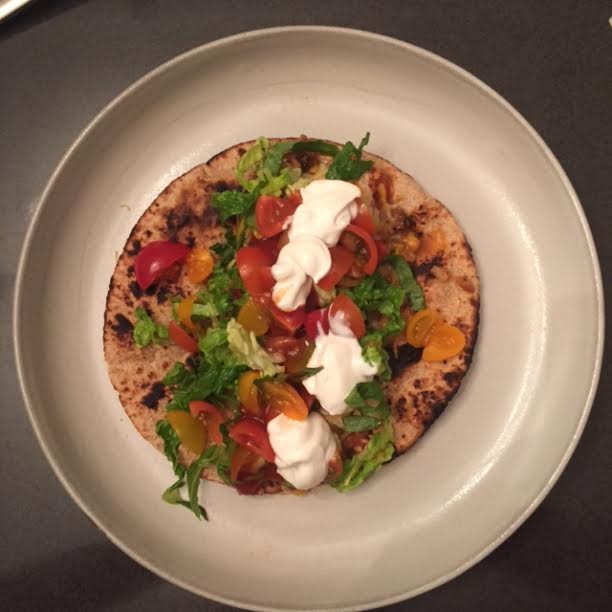 The red pepper adds a nice little sweetness to the taco mix. This is even great chopped up over lettuce for a barely-any-carb salad.

**WARNING WARNING** This dish totally made me want margaritas —-> 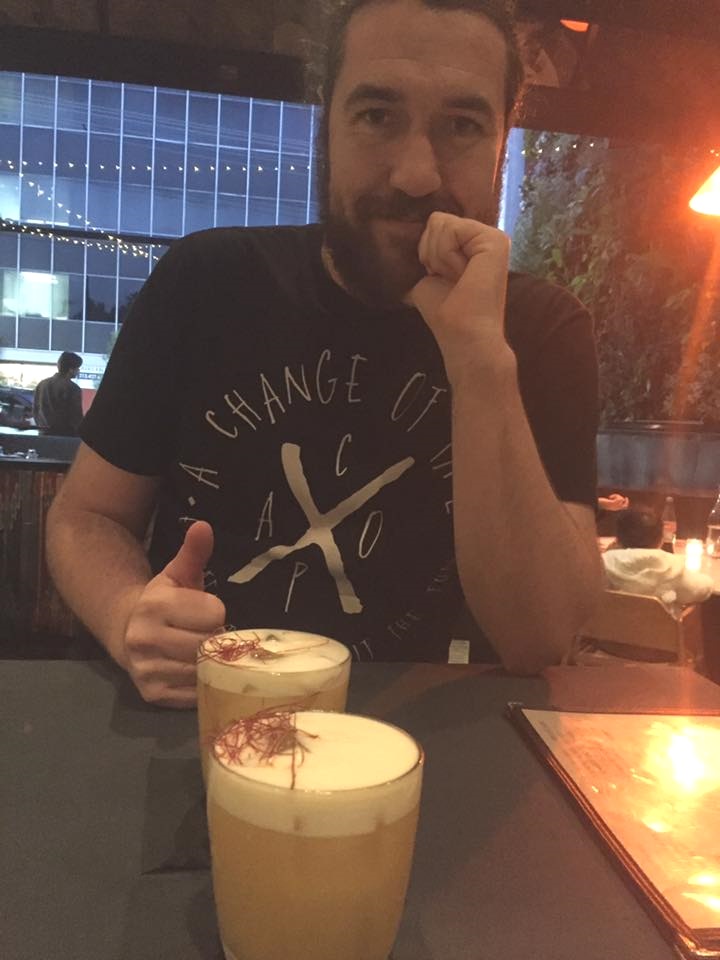 I highly recommend Goldie’s on W. 3rd. They have a Happy Hour Monday through Saturday 3-6p and Sunday 3p – close! This Golden Girl cocktail (spiced tequila, passion fruit, agave, lime, egg white meringue) was $6.50. Score! It even had a little kick, which we both love.

Thanks for stopping by SweetJamz!

We’ve been a couple of slackers as far as SweetJamz goes. We went to Chicago & Detroit for Christmas. We ate at my brother’s restaurant in Evanston, IL, called Oceanique <— to die for. (I need to do an entire post on just that experience.) For the family gathering, I made my infamous truffle mac & cheese, which never disappoints. Before that, we made three attempts at fudge (that, mind you, I've made every year) and they were all disasters. We also made a pumpkin lasagna that was pretty bland. And then with everything else going on in the world, we kind of decided to just let 2016 hang itself. (Too brutal?) 🙂 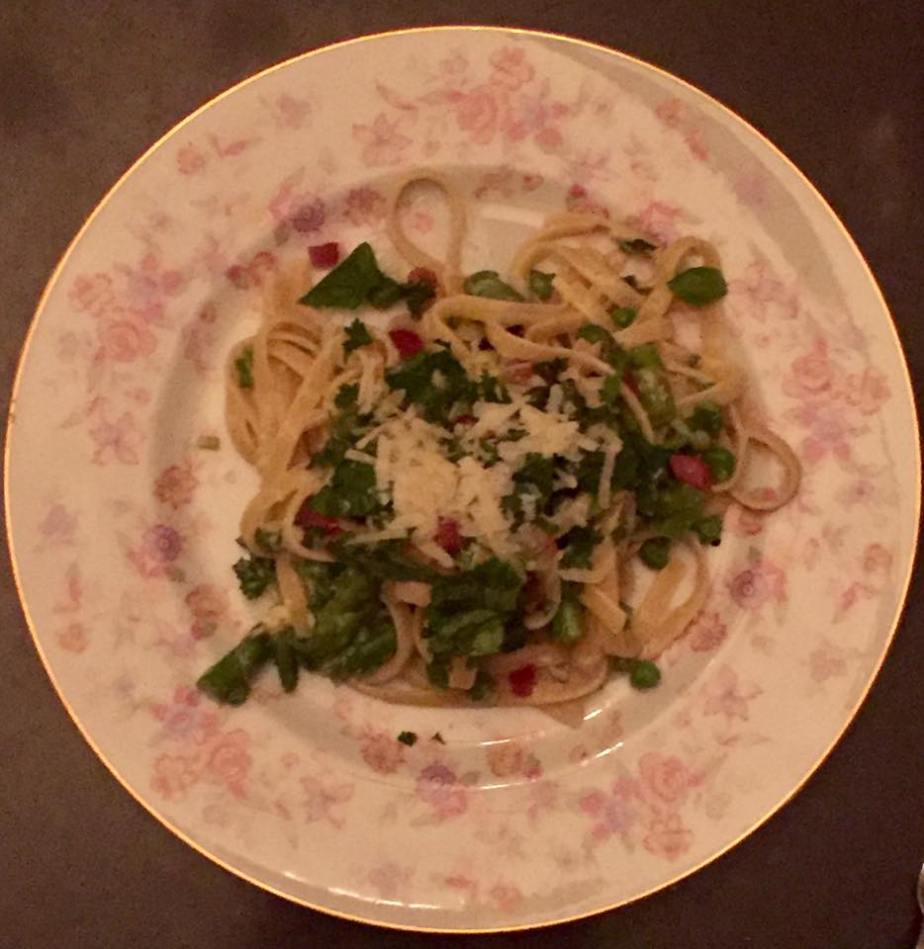 Fettucine with Peas, Asparagus & Pancetta – served on my Mother’s china! 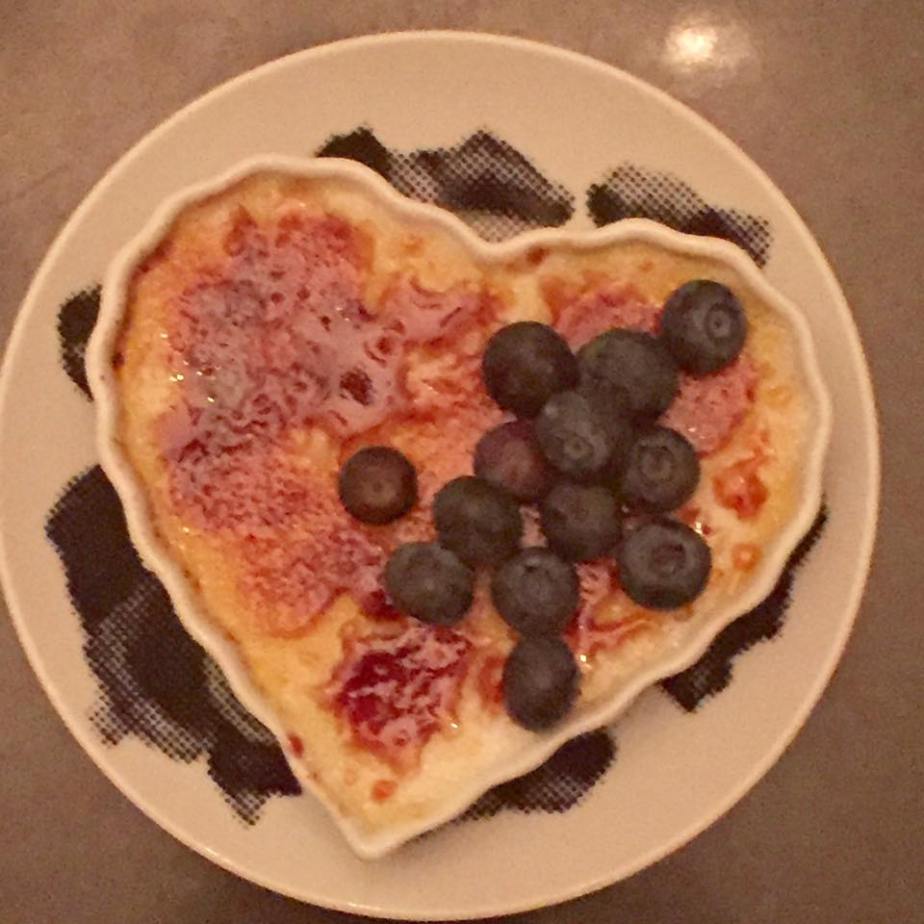 We had our friends Laurie & Bobby over and decided to delve into this delicious bon appetit recipe for Fettucine with Peas, Asparagus & Pancetta (<– click for recipe). Although you might still be seeing snow where you live, this pasta pushes you forward to Spring – it’s so light & fresh with just a dash of cream. My only suggestion is I might double the amount of Pancetta. It can only get bettah with more Pancetta! (We won’t mention how Bobby wouldn’t eat any of the asparagus, either.) 😉 I would definitely make this many times over.

Jason & I have had a long love affair with Crème brûlée. For some reason when I made the trek from NYC to LA ten years ago, my kitchen torch got the toss. Fortunately, I did hold on to my cute lil’ heart-shaped ramekin dishes. This year, thanks to Santa, I’m back in the kitchen torch game. I used Ina Garten’s simple Crème brûlée recipe (<—click for recipe). I'm telling you – this recipe is so much easier than it looks. It's a super IMPRESS ‘EM dish & oh so delicious. And who doesn’t LOVE playing with a kitchen torch (Jason is aggressively nodding in agreement!). I recommend always adding your favorite berry on top. It's the icing on the Crème brûlée cake.

I should also mention that at the end of last year, I passed the WSET Level 2 wine certification program. It basically means I tasted 41 wines in two days & lived to talk about it. And I can now drink wine like a pro, so watch out!

Thanks for stopping by!

Well, hello there, lover of all things SweetJamz!

SweetJamz describes anything that is considered to be wickedly positive. In our case - it's music, food, booze, love & life.